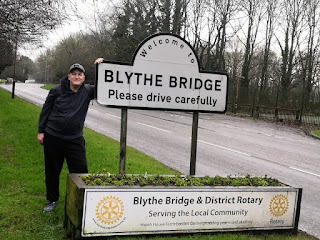 I think you’ve probably got the gist of what’s going on by now. The tragic loss of my son inspires me to finally do something useful with my life. Well today was the day the talk stopped, (well that’s actually a load of bollocks, as most of my friends will happily testify the talking never stops with me) and the walk started.

So at 8am my mate Steve turned up at my doorstep and the training started in earnest. The plan was straightforward enough, walk from my house to Draycott Sports Club, which is nigh on 12 miles. To me, that is a bloody long way.

I live a decent stone’s throw away from the Thistleberry pub just off Keele Road and by the time we got to the Newcastle Golf Club roundabout (not even ten minutes for those of you who have absolutely no idea where these places are), it started hosing down. It didn’t stop for at least an hour. And that was only for a brief pause before we were both treated to another lashing of rain. Yay!

Now as regular readers might recall, I recently splashed out £130 for a very fancy pair of trainers well suited for walking. Exactly for that purpose in fact. However, being the numpty that I am, I neglected to prepare any other suitable clothing. I was dressed in tracksuit bottoms (the cheap, skanky kind most people wouldn’t leave the house in) and a training fleece thing. Both were wet through in no time. What a berk!

But once you’re wet it doesn’t really matter and I quickly found the walking to be really invigorating. I’m not sure I would have felt the same if I’d been doing it on my own and I was massively helped by having a good mate with me the whole way, who also knew the route pretty well. 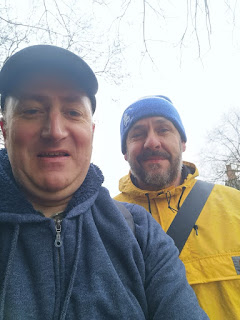 There were a few hilly bits which I really struggled with and after about eight miles I started to appreciate the wisdom of the advice that my mate Jamie - the walk planner – had given me about using a product called Bodyglide. I’ll definitely be slapping that on fairly liberally next time.

I was aching a fair bit by the end but I found that as I kept thinking about Thiago it drove me forwards. It was simple really, whatever pain I might be feeling, it was nothing compared to what that poor lad had to put up with in his tragically short life time and he never once whinged. He was uncomplaining and full of positivity to the very end. So it was a case of ‘come on Gibbs get up the hill!’

After not much more than three and a half hours, we arrived, drenched, but having accomplished our mission. A quick shake of hands and Steve was soon on his way back to his family via a lift from his good lady Sarah. I showered at the sports club and got a lift to my mate Jim’s gaff where, with Angelica, Elisa and the big man, I enjoyed an outstanding roast lunch. Suffice to say, I tucked in with great relish.

It’s mid evening now and while the aching has eased off a little, new pains keep presenting themselves. But you know what? I am feeling alive. Very alive!