The big man arrives - In the name of Thiago - Day 6 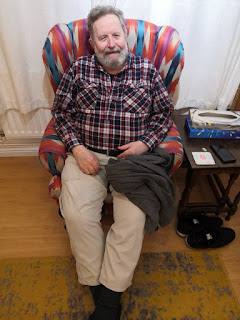 So following an afternoon of relative calm yesterday and similar this morning, Angelica and I have accepted our fate… sorry our latest visitor. It’s the big man, my Dad, or as he should be known to you, Roger.

As you can see from the picture, I wasn’t lying when I said he was a big man. To be fair to him, he was a colossal 133kg – that’s a whopping 20 stone and 13 pounds to those of you still using old money – when he returned to the UK from Australia in October and now he’s down to a positively svelte 115kg. If he carries on at that rate it’ll be him calling me the big man come the spring!

Thiago’s passing has been a strange one for him. At the very best of times, my Dad is not what you’d call an emotional man and he’s been very detached from everything that’s been going on. He never met Thiago and for that reason, he finds it hard to know what to say or do. Nothing unusual about that of course, the same could apply to a lot of people I meet. Dad came to the funeral but he’s not spoken to me about that day since.

My parents divorced while they were living together in Australia. Mum remarried and still lives in Melbourne, while Dad came back to the UK in October after a 17 year sabbatical and is currently splitting his time with his three kids – I also have a younger sister Holly and a younger brother called Judd. I am slightly anxious about having him stay with us as we share the character trait of patience not being our strongest suit! Let battle commence.

Since Thiago died, I’ve been giving a lot of thought to the relationship I have with my daughter Elisa. She’s 11 now and is without doubt a chip off the old block. She is absolutely brutal with me. During an idle moment earlier, I was watching a video of Coco Gauff the American teenage tennis player. Coco is coached by her Dad and in this video, she admonishes him for using a ‘curse’ word. The word in question was damn, which as he rightly points out is not a curse word at all.

It made me think about Elisa. As Elisa started to become aware of swear words, we agreed  that I would pay 20p every time she heard me use one. After a couple of days I realised I could not carry on with this as it was bankrupting me and we switched to a different form of punishment – 20 star jumps. Right now, I’m in debt to the tune of 900.

I’ve had such fun raising my amazing little girl and it makes me so desperately sad that I’ll never get that opportunity with Thiago. But you know what, I did make every second count. As I write this in floods of tears (again) I don’t have any regrets – I could not have done any more for my beautiful boy. As parents we often beat ourselves up about the things we could have done better but we rarely praise ourselves for a job well done. Well bollocks to that, I’m saying it here, I’m a good dad!

My daughter Elisa is a credit to Angelica and I, while our little man Thiago was very much in the same vein. He had a smile that lit up the room and a sense of fun that was so infectious. Thank you little man.

Right I’d better go see what the big man wants now, I can hear him sighing..