The red mist descends - In the name of Thiago - Day 12

In the name of Thiago

Well folks after a day of melancholy yesterday, I was back up and firing today. An emotional low followed almost immediately by an emotional high. I truly thank my lucky stars for being married to an extraordinary woman who completely fails to comply to any stereotypes of the fiery Latin-American. Phew. Can you imagine if we were both like me? Quelle desastre!

However, while the fire in Angelica’s belly only comes out on occasions when I really have messed up, (she seems to be giving me a wider berth these days) the emotional rollercoaster of doing anything with my dad presents an altogether meatier challenge. And it’s a challenge I just can’t help myself from rising to, bloody fool that I am. 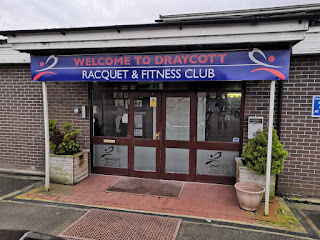 After a three-setter decided by championship tie-break at Draycott this morning against my old mate Jim, I managed to maintain my impeccable 100% record. Unfortunately for me the old bastard has taken me to the cleaners on all four of our matches. For the record, Jim’s victory today was by the margin of 6-1, 4-6, 10-3. So after another tennis humbling at the hands of my favourite 73-year-old, it was back to base to prepare for the next house viewing with my old man.

Giving directions to anyone can be testing at any time and I was trying to be patient with him but Christ alive did he do my fecking head in today. Approaching a roundabout with three exits, one clearly going to the left, one going straight on and one going to the right, my Dad would not accept the instructions, ‘left, right or straight on’.

Nope, it had to be first exit, second exit etc. Any use of left or right was met with stern disapproval, much tutting and a slightly impatient demand for the right information. My instruction of "just stay on this road for about 6-7 miles until I say otherwise", would be met with incredulity and of course me then being asked if he needed to come off at almost every turning. At one point I almost lost it as he attempted to turn into what was clearly someone’s drive when I said next left as if he was trying to make his point.

But the funny thing is, in a way, which I really can’t explain, I find the fact that he seems to take so much enjoyment in pissing me off, strangely reassuring. I mean, bloody hell I felt like throttling him at points today but then the split-second passes and I quickly fall into a magnificent bout of brutal swearing and regress to rolling around in hysterics.

It sure as hell takes my mind off the sheer misery of my constant grief. Maybe the old man knows exactly what he’s up to and I just fail to appreciate his subtle ways and means. Does he bollocks, he just loves a good shit stir. But I’ll take it and laugh with him because I can’t cry much more!

The other thing I did today (well actually there were more than two, for example I washed some pants), was finish reading this very entertaining book. 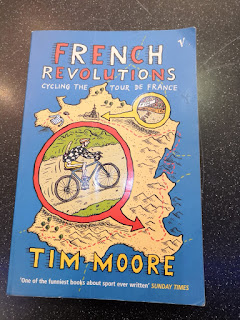 It was lent to me by my friend Alex who, when hearing about my plan to walk from the south east tip of England to the northern frontier that is Stoke-on-Trent, decided I could do with comparing notes. This Moore fella cycled 3000 kilometres following the Tour de France route, so knows a thing or two about making a trek.

It is a pretty good effort but you know what, I’m still not having it. He wasn’t trying to raise a five figure sum for the NHS and he sat down the whole way. Lazy bloody toerag if you ask me!