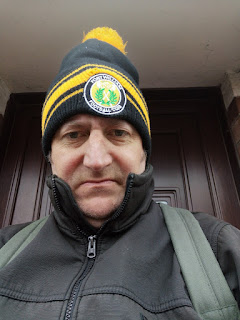 I’m sure many of you have at some point been given the advice, ‘do more of what works’. Well today I’m going to throw all that out the window and try something rather different and share a few pictures of me at various stages of distress/my journey through the elements on my way to Stone. Apologies in advance if you are bored with that concept already. 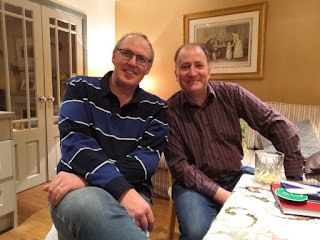 (me with Lamont last night , after a magnificent spread prepared by his lovely wife Mayra)

So despite feeling a little worse for wear after a fine evening’s entertainment with Lamont and Mayra Howie in Trentham last night, after a slow start to the day I readied myself for some more training.

But not before I’d caught up with my old mate Skinny Rich. I’ve known Skinny since we met in Portsmouth in the late 90s. Another mutual friend Fitz is trying to get Skinny, The Beast and Rob Alcoholic, (suffice to say these were very different times) together for a stage of the walk this summer. Maybe it will come off, maybe it won’t but it was really good catching up with a mate I probably only speak to once every 5-6 years!

Then as I looked out the window slightly mournfully watching the rain come hammering down, I faced reality. I needed to get out. What with being back at work it has become difficult to keep up with the ‘training’ if indeed I can even call it that. On occasions I do feel like a bit of a fraud, as at the end of the day what I’m doing is walking. Along with some tennis and yoga, that’s my training. 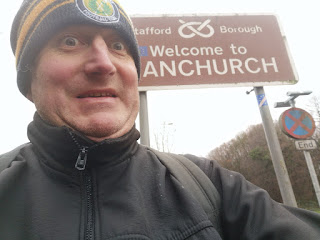 (Hanchurch - well you know how I like to drop my aitches!)
But I know in my mind that I am doing some amazing things. It’s not easy to change the way you live your life but that is what I started doing this month. It’s a long journey, which ends with a 300 mile walk in June/July but maybe that might just be the end of a chapter with something else to come?

Back to the now. I set off around half twelve and much like my walk to Draycott with Steve a fortnight ago, it started hosing it down within ten minutes. I didn’t find walking on my own too bad and realistically I know I’ll be doing quite a bit of it in the summer so I better start liking myself a bit more!

It was fine. There were a few parts of the route where there was no path and then some twat in an Audi drove deliberately through a large puddle and drenched me somewhere between Barlaston and Meaford. As you can imagine, I stayed completely calm... 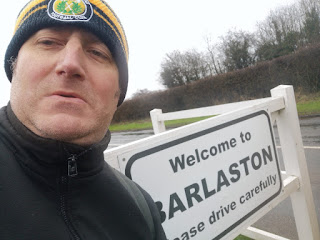 The choice of Stone as my place to walk to today was because it is the start point for the final stage of my walking journey on July 3. So I was effectively doing the final stage in reverse. When I got to Stone ten miles and about three hours later, I went to the Swan Inn and saw that they already had a charity collection tin for Birmingham Children’s Hospital. I had this thought that I might set off on the last leg from this pub but if they’re already collecting anyway, it might make it a little bit trickier. 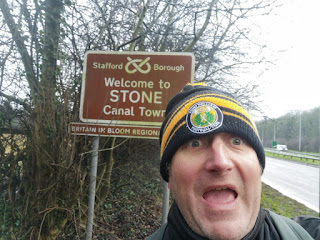 Anyway I’ve got the name and number for the manager there so I’ll have a chat with her tomorrow. All in all it’s not been a bad weekend and life continues. I’m still struggling horribly with that but then what do you expect? Like Jamie says to me, deal with today. I’ve dealt with it now. Well done me!

Now you’ve read my blog, maybe you’d also like to donate to the fantastic hospital charities I’m raising money for. Please give what you can.