No terrific insight I might add, just a bit more of a look into the lives of those close to us. In this instance I mean close geographically rather than very good friends and family.

While bringing the washing in this evening I was treated to the hearing version of a bird’s eye view of some neighbourly histrionics the other side of the garden hedge. Nothing untoward I might add as they are wonderfully kind and hard-working folks but enough to allow me a moment to be slightly amused.

It’s weird isn’t it? I wasn’t doing anything wrong by being in my garden while this episode was playing out and yet I felt I was intruding. Admittedly, not so much that I went back inside – well I didn’t want to miss the conclusion to the show – but enough to well, feel just a little strange. I am prone to giving a loud greeting over the hedge from time to time but even I wasn’t feeling that brave or stupid on this occasion! 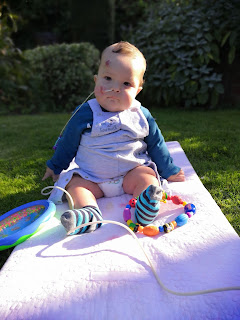 This episode made me think of the little man again, and the photo above was actually taken in our garden towards the end of September last year. It is one of my favourites. He’s not smiling perhaps as much as he does in other photos but it is one of my last truly happy memories of just spending time with him, before it all turned to shit and life was irrevocably changed for the worse.

All the talk of course at the moment is of intensive care units and what they are like. I am very well versed in the bloody places of course now and Angelica has far too much knowledge of them.

You’ll appreciate that there’s not much I can see on here for reasons of privacy and appropriateness but Angelica had a really tough day yesterday and when we spoke about it briefly this morning, it wasn’t good. I do feel rather helpless in this situation, which is where the whole thing of working from home really can be a curse. Alas, it has to be this way for now at least. 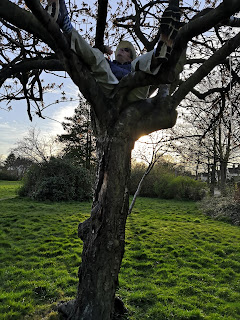 When my work was done for the day, I took my daily walk up to the green with Elisa and we played a bit of footie, footgolf and lastly tree climbing. I decided that I’d have a bash this evening. Elisa with unsurprisingly little encouragement, gave me her insightful feedback afterwards, which was that the climb up ‘wasn’t terrible’ but the descent was ‘graceless’.

That’s bloody harsh isn’t it folks. I mean frankly, how a nigh on 100kg man does anything particularly gracefully is beyond me. I mean I know that I was hardly elegance personified but even with a slight overbalance on the way down I managed to land on both feet. I’d take that any day of the week. But no, Elisa wants to see grace as well. I blame bloody ballet for this. Grrrrr!

And that was it really, off we trotted and another day of self-isolation with one instance of outdoor exercise was done. Now have I got half an hour of yoga left in me…

Please don’t forget thatI’m fundraising for Birmingham Children’s Hospital and Royal Stoke University Hospital. Help me do my bit if you can folks.