That doesn’t half feel good writing 170. The maximum check-out in darts, I’m starting to hit some pretty big numbers now, nearly half a year’s worth of blogs no less. As that graceless turd Mourinho, who manages the football club I support would no doubt say: respect.

Today has been a much better day. I started it with a lot of anxiety about a job I’d been given to do and ended it by knowing that I’d worked really hard and gained, yes that word again, respect, for being honest and up front about where I was at. 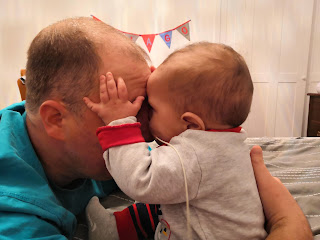 It was a tough day emotionally for me yesterday, but I’m glad to say that whereas in January and into February, it was just one utterly shit day after another, at least now those dark days are interspersed with some welcome shafts of light. I am becoming increasingly impressed at the level I am able to function at and today was further proof of that. I am pretty good at what I do. If Elisa were here now she’d retort: and what’s that Dad? But she’s not, so we’ll move on.

In between the calls, mails and interviews that form my average working day at the moment, I have started to build a bit of rapport with my builder Mark. Mark is a quiet, unassuming and professional man and so we wouldn’t be an obvious match in a social circle. But being around day after day requires some lighter moments I think. Or perhaps he just likes to indulge me – well he is getting paid I guess! 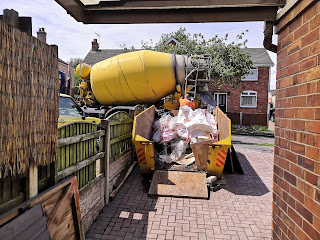 A bloke turned up today with this cement mixer and it was spraying all over the place. Mark’s son Matthew, who like his Dad is fairly reserved, said the bloke was the worst he’d ever worked with. The pair of them were absolutely covered when they came back from the vehicle. I was trying very hard not to laugh and probably not pulling it off.

I’m starting to think about what our house is going to be like when we come out the other side of this project and that made me feel a lot more positive. The stress of it all at the moment is causing Angélica and I some angst, but I’m impressed with the way that we’ve both been really understanding towards each other in recent times. Like every couple we have our problems, but the resilience we’ve shown is something we both deserve a lot of credit for. 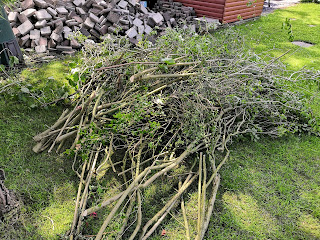 We’re having a fence put in at the side of the house where all this hedge used to be. We may have to have a side wall taken out as well depending on what an overzealous building inspector from the council has to say about access issues to drainage.

Being a building inspector seems like a pretty cushy number to me. He was meant to come round today and didn’t, came round last week for about five minutes and may come round on a couple more occasions in the next few weeks if he can be arsed. That’s cost me 600 notes. Still I guess, local authorities are feeling the pinch as much as anyone at the moment..

Well my beautiful wife shall be returning from work any moment now. She may have already in fact as I tend to blog from the summerhouse these days if I can. It’s so much more peaceful here and the words seem to simply flow out while I listen to the birds.

Please donate if you can. Things have dried up a little on that front – hardly surprising I know and I’m sure that it will pick up again as we get closer to September. Night all.