Fucking waterworks coming back today, just in the last five minutes. It's not surprising really. I've arranged for Angelica and I to meet a lady at Keele Cemetery tomorrow to discuss planting an oak tree there and I've just been sharing some photos with my sister Holly of Thiago's headstone. It's a beautiful way to remember my boy, but Jesus Christ does it absolutely fucking destroy me when I do so.

The planting of the tree is significant for Holly as well, as it was her gift to us last year. Planting the tree at the cemetery would allow us to have a meaningful place where we can visit and know that there will always be a part of Thiago that lives on. In simple terms, it's just something that makes me happy for a while, however short a time that might be, and when you're in my position you just look for anything that brings not so much hope but reassurance I guess. Holly phrased it beautifully tonight: "Try to see the little moments of beauty in each day." That's a very true way of putting it for me right now. 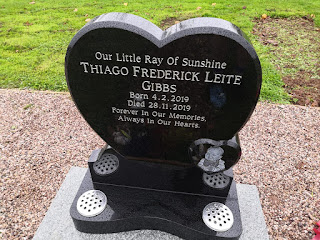 I had some feedback on a recent internal job interview today. I deliberately wanted some space between the interview and the feedback so that I could gather my thoughts I suppose. I took some notes and listened. I would say I learnt some things, but really now is most definitely not the time to think about that any more. Certainly not tonight after the emotional pain.
I had another postcard from Gayle from the parent bereavement charity 'A Child of Mine' today. It didn't necessarily resonate immediately but now looking at it as I am it's giving me a little bit of reassurance. 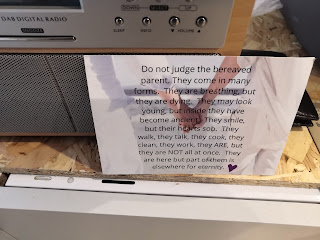 Two lines on this card resonated most strongly this evening, when talking about a bereaved parent. 'They are breathing but they are dying. They may look young, but inside they have become ancient.'
When I've written before about wanting to be reunited with Thiago and simply being buried next to him, it's not that I wanted to give up on life. It most definitely wasn't that, I really want you all to understand that clearly. I know that I feel really, really sad quite often but apart from some recent days, I've not experienced depression since the little man died almost a year ago now. I hope that my life's journey has some distance to run but when my time comes, I won't have any fear, as I'll have my little man back. 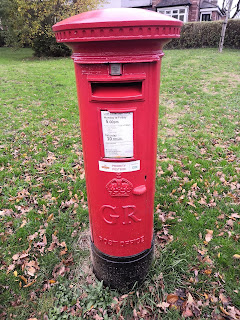 This was my one form of exercise today, a short stroll to the postbox and back at lunchtime. Writing that sentence has got me thinking about the book I'm reading - the book lent to me by Holly - The Unlikely Pilgrimage of Harold Fry. Unlike Harold, I came back from the postbox at lunchtime. I cannot imagine for a moment what Angelica would say if I suddenly declared that I was walking to Berwick-upon-Tweed. Harold set off from somewhere west of Dartmoor so I wouldn't have anywhere near as far to go. Maybe that would be how I'd sell it to her. Or maybe not.
Gees, I feel tired now. I won't say I was full of energy at 6pm but this last couple of hours has absolutely blitzed me, so I'll simply point you to the fundraiser and retire to my room for a read..