Here I sit by the radiator listening to Echobelly and contemplating a reasonable day of well, getting by. It does come down to that a lot of the time. One of the chaps that was at this group for bereaved Dads that I joined online on Wednesday evening, said that it's the days that build up to anniversaries that are much worse than the days themselves.

I fucking hope he's right, though to be fair today's been fine. It started with a phone call from the cemetery, which I wasn't expecting. The plaque for Thiago's commemorative oak tree had arrived and what did I want for them to do with it. I decided to collect it, so that Angelica and I could pop it into the ground when we visit Thiago and his piece of living history tomorrow. We're just going to quietly go about our business tomorrow, that way the day will be easier to manage. It's a bloody pisser that the pubs are closed though, I reckon I'll really want a drink tomorrow. Ah well, best get stocked up tonight I guess. 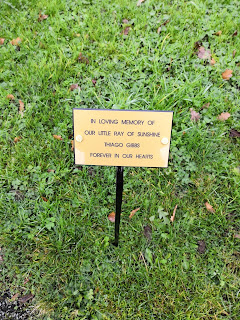 The plaque is simple but impactful, certainly to me anyway. And as I've said in previous blogs, it's not so much about what it marks now, it's about what it will mark in many years to come as that tree towers above one and all. That is what brings me hope for happiness in the future. Well one of the things that does at any rate.

Something that doesn't bring me much hope is a visit to the old man's. He frustrated me today, which was well, frustrating. When he came over last weekend, it was a little different. I don't know really, I'm really not sure what I do know any more. These are strange times, not the Covid shit, the grief shit I mean. My mind has definitely altered and I've not smoked or snorted anything. Seems a little unjust really. Couldn't afford a habit now even if I wanted one. 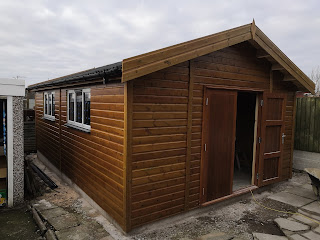 Here's the latest view of Dad's shed. Gees I wish I could be interested in this beast that will stick out like a sore thumb across much of Longton, screaming to all ne'er-do-wells 'come and fill your boots'. Dad could live in this fucker, which I kind of hope he does, as that would then justify the many thousands of pounds he's spent on it and is continuing to spend on it.

As the least practical of all his children, I feel the least able to have any meaningful conversations with him about it. It just hurts me seeing how much money he's wasting - he'd say spending possibly even investing, wasting covers it in my eyes. And I'm far from being the only one. But the flip side of that is, if it makes him happy, then so be it. And as it turns out, wasting money and having no idea about the state of his finances are things that make Dad very happy indeed. I did well to survive the two and a half hours of my day off with him - lesser people would have fled long before.

The thing with the old man - and I do love the stupid fat fuck - is that he really struggles to think of anyone else. You seem a little upset son, what's up? 'For fuck's sake Dad were you even paying attention when I showed you the commemorative plaque?' I actually think he tries, it's just that he's shit at caring. 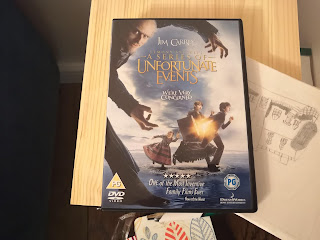 I went for an hour's walk this afternoon with my mate Steve, which came as a blissful release frankly. It had been a while since we'd shared any time together but that's the virus for you I guess. I'd been home no more than a couple of minutes from my walk, when her ladyship got back from school, so we sat and watched this while we waited for the heating to come on - that's the 5pm treat in my gaff. It doesn't 'arf make working from home a challenge but at least my heating bill still makes people's jaws drop. I know, I know my priorities are all fucked up, but you know what it's not just my priorities that are pretty fucked. Not these days anyway.

For those of you who haven't seen 'Lemony Snicketts - A series of unfortunate events', it's about three orphaned children. I asked Elisa if she knew where she'd be going if the good lady and I popped our clogs at any point over the coming six years. She racked her brains "Grace's, Bella's Camilla's, Noran's? Only one of those four is an adult I want to point out to start with. When I said no each time it finally dawned on her that it might just be my brother. "God no, surely not uncle Judd, I think you'd better hang around for a bit then." Yes ok Elisa, I'll do just that as you've specially requested it! 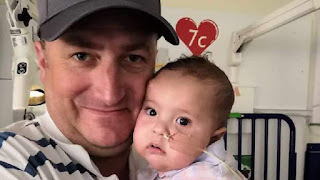 There he is the little beauty. Those eyes, I can't imagine how many hearts he'd have broken. A fuckload is my conservative estimate. Tomorrow I shall honour his name and honour his memory. But the reason tomorrow doesn't have to be a big thing is because I honour his memory and am strengthening his legacy with every passing day. At this very difficult emotional time, that truth is something that comforts me.

Spotify has just started playing, (don't laugh) 'I don't believe in being brave' by Menswear. Well it's apt - the tears have come back in waves now and I'm not fussed about fighting them. It's not about being brave, it's about being true to myself. I'll just keep on with that; I'm rather good at that now you know.

If you fancy making an anniversary based donation, please be my guest. And uncle Alan and auntie Theresa, if you're reading this, I'm very grateful for you doing just that this morning. Bless you all, it's  Friday, which can mean only one thing - it's time for chips..