Before I divulge the meaning behind today’s blog title I’m going to start by taking things back to last night. Not long after I signed off yesterday’s blog, I enjoyed a garden beer with my next door neighbours Steve – yes that’s Super Steve – and Louise, who’s also pretty fab in her own right I should add.

Elisa has managed to manoeuvre a pretty handy arrangement at Steve and Louise’s gaff, where she can pretty much just hop over the hedge and go and play in the theme park that Steve’s built at the back of their garden whenever the mood takes her. In return my lovely neighbours get a break from their children while Elisa plays at being a babysitter.

Elisa has also started negotiating a fee for her childminding duties. She’s gone with a fiver an hour, but this can be paid in slices of pizza or a chip bap is how it was left I think. She reckons she’s owed a quid from yesterday – perhaps I’ll just ask Steve to knock it off his plumbing bill! 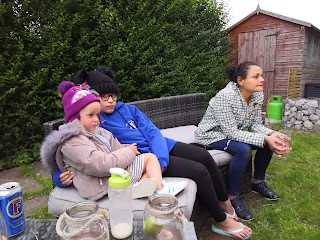 Here’s Elisa in a rare moment of affection. Obviously it’s not being directed at me – Good God no, that’s a ridiculous concept. But she is very gentle with Steve and Louise’s daughter Florence, who is also a real character. They both share a passion for a natter, so it’s no surprise that they get on well.

So, to the relevance of the blog title. In what I can only describe as a compliment, which I was completely blind-sided by, Angélica was observing how well I’ve been managing to be working from home with all this building work going on around me, especially when she’s off shift.

I do think that very quickly I have become quite accepting of the chaos that frequently unravels around me in the working day, and I’m fairly impressed with myself that I’ve managed to co-ordinate video interviews and the like around such things as the frequent use of a pneumatic drill! 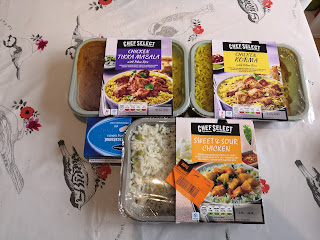 The disruption does mean we have to accept that it’s hardly going to be cordon bleu in our makeshift kitchen/study/work space/lounge. This is what we’re looking at tonight. That paracetamol wasn’t necessarily going to be on the menu but after a fairly mentally taxing day, I have already had to delve.

We’re ploughing on as best we can, and I think that as a family, we’re doing pretty well. My Dad’s been a really good support at this time as well, helping us out by letting me use his washing machine and providing some outstanding meals from time to time. I’m not finding all the disruption all that.. well disruptive. 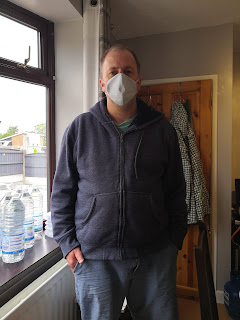 Speaking of disruptive things in our life, I need to get back into the swing of mask wearing, what with these new regulations about to kick in. I wore one on my visit to Bentley on Friday, which reminds me I can now share with you the picture of me being within touching distance of their something or other convertible, which is a pretty tasty bit of kit.

Before you ask, no I wasn’t allowed anywhere near the wheel. Wowzers can you imagine? It’s probably worth enough for me to simply drive off and start a new life. Shit did I actually write that, I really need to keep some of these thoughts in my head. 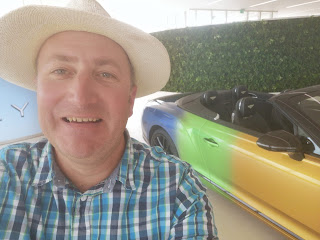 So there’s me with the Bentley in the background as promised. The international prestige brand is partnering up with Cheshire East Council for the Virtual Pride event I’ve been banging on about recently, which is a fairly big deal for the council.

So all in all, it’s been a good day topped off by Spurs having somehow managed to follow a fairly uninspiring North London derby victory over, as my good friend Jamie Hickey described them ‘the interloper nomad dog nonces disappearing down the river with their rancid tails sloped between their diseased legs’ – he’s a very balanced fellow – with another victory against the Toon Army.

Don’t forget to donate if you can folks. It’s been a very good day, but why not make it just that little bit better!